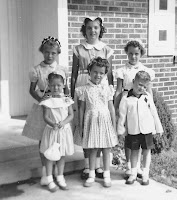 That's what Aunt Leona used to say to us every year.  How corny.  But that was Aunt Leona.  I always think of her at Easter time...as well as many other times throughout the year.  When I think about Easter I also think of new clothes.  I've never been a big shopper, but my mother was and always liked to dress us very well.  But Easter was something special.  New dresses, hats and maybe even gloves or a new purse...and always new shoes.
I think it's a little sad that we don't dress up much any more for anything.  I know it's not about appearances, but still -- it was nice.
I do love springtime and so it seems fitting to deck ourselves out in something bright, fresh and new and join nature in celebrating new birth.  The earth with it's

showing off -- especially here in Georgia -- seems to welcome us to join in the festive spirit of the season of resurrection and joy.
So it is in that spirit that I have taken the grand kids shopping for new Easter clothes the last few years.  Jodi and I find a time when we can get together and I take us all for lunch and then a little shopping.  In 2010, I bought Emery his first tie...and he LOVED it!  Girls are easier...so many pretty dresses to chose from and Savannah is good to go. 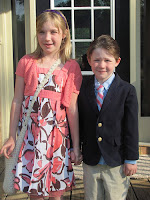 I was surprised and tickled when in 2011, Emery was more excited to get a new outfit than Savannah was.  She was looking at the dresses and he dragged mom and me over to the boys' department.  "This is what I want!", he said triumphantly as he pointed to a 4-piece outfit.  Jodi said, "Oh.  You want that color shirt and a new tie?"  But he said, "No.  I want all this." and indicated with his hand the whole outfit.  It was a shirt, tie, pants and sport coat and he was quite excited.  So that's what he got.  He told me one time later that he looked like a "newscaster" when he put that coat on.  He wore it every chance he got.  Savannah settled on a pretty little sundress in coral colors with a matching jacket. 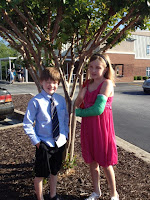 By 2012, Savannah was getting more into the new dress idea.  She was trying on a number of pretty spring dresses and Emery just decided he wanted a new shirt and tie and some nice shorts for wearing to church all summer long.  Savannah had picked a very pretty and "flowy" pink dress.  But by the time Easter came, she was also sporting a bright green cast on her broken arm!  But she looked lovely just the same.

So this year we did it again.  After lunch at Rafferty's -- one of my favorite places -- we went to the Athens Mall.  Emery didn't seem all that interested this year.  I asked if he wanted a new tie again this year and he said he didn't think so.  But while Savannah was trying on quite a few pretty dresses he was getting bored.  So I suggested we go over and look at something for him.  His mom said he could use a nice pair of khaki shorts for church and maybe something to go with them.  So I asked if that was what he wanted to go look at.  He said, "No.  Come here, I'll show you" and he took me by the hand.  Again...he spotted what he wanted and was quite sure about it.  For a boy that has trouble sometimes making a decision, he doesn't hesitate when he decides on fashion.  He took me right to the suits, again, and said, "Here.  This is what I want."  And it's a good thing they had it in his size, because he was adamant.  He wanted the red shirt, black pin-stripe vest, black pants and matching tie.  Savannah chose another pink dress this year.  A very pretty springtime pink -- the color of azaleas.  It had pretty ruffles down the front and the look wasn't spoiled by a cast on her arm. :)
Posted by Quilting Bea at 3:16 PM

I love seeing all the Easter pics lined up. We appreciate the new clothes you buy each year. Thanks! :)

This is my first time i visit here. I found so many entertaining stuff in your blog, especially its discussion. From the tons of comments on your articles, I guess I am not the only one having all the leisure here! Keep up the excellent work. web design web design web design

Quilting Bea
I'm a Christian, a wife, a mother, a grandmother, a sister, an aunt, a friend a Batty Babe and a quilter. That's a lot of stuff to be...that why I have to weigh so much! :)

When Life Hands You Scraps... Make a Quilt!